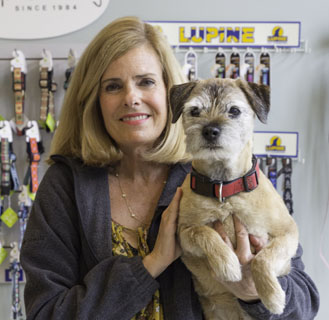 Dr. Matthews opened Village Veterinary in 1996.   She is a 1989 graduate of NCSU College of Veterinary Medicine.  After graduation Dr. Matthews was awarded a fellowship to Harvard School of Public Health where she studied retroviruses for one year.  Since then she has devoted her energies to private practice, with special interest in internal medicine and alternative therapies. 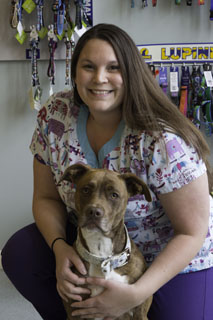 Danielle has been in the veterinary field since 2006, and a licensed veterinary technician since 2009, when she graduated from St. Petersburg College with a degree in Veterinary Technology. Danielle joined the Village Vet team in 2015 after moving back to Maine from Florida. Danielle has a special interest in surgery and senior care. Danielle’s pet kids are all rescues and include her 2 dogs Fiona and Gwen and her 2 cats Jem and Binx. Outside the hospital Danielle’s interests include spending time with her husband Jim and son Logan, swimming, exploring, and cooking. 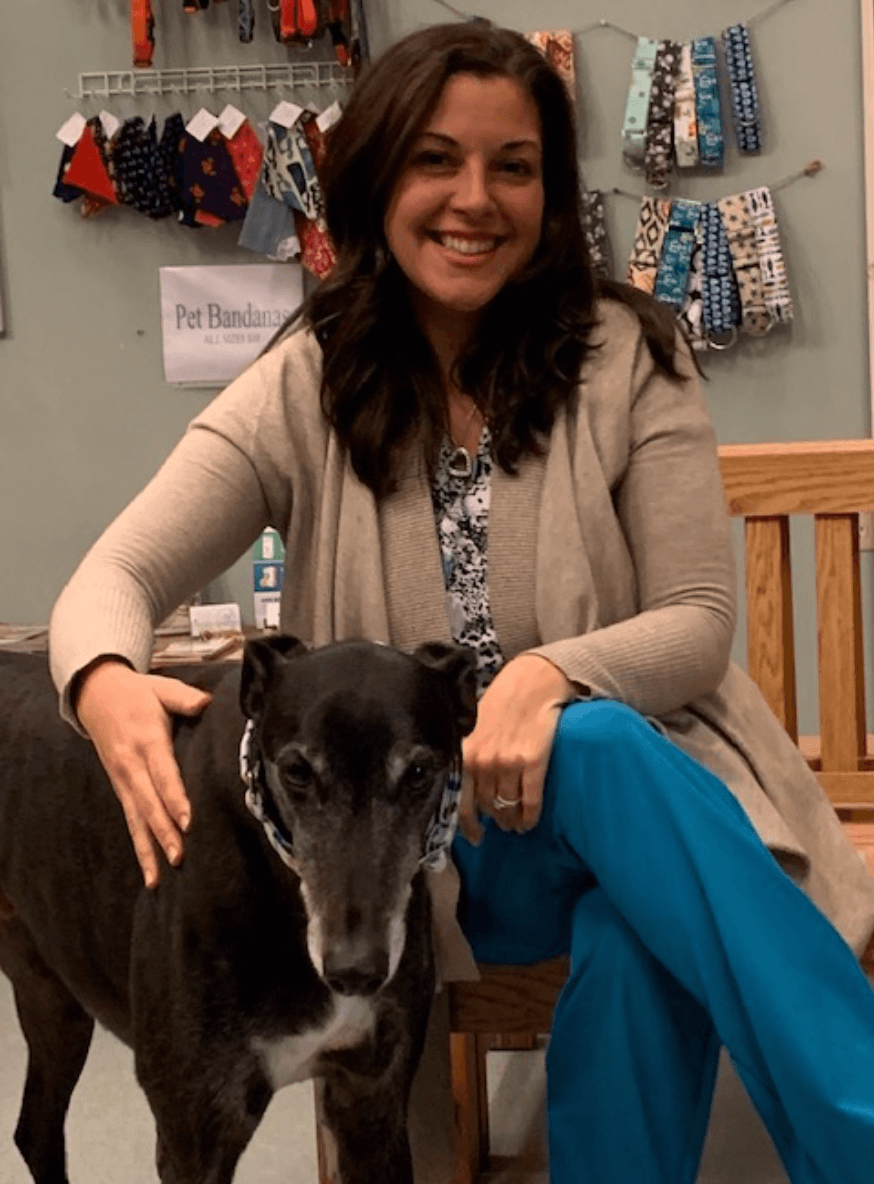 Michele joined Village Veterinary in April 2019. Michele is a true Jersey girl but spent many years living in south Florida where she worked in both commercial as well as general aviation as a Flight Coordinator. Michele and her hubby Andy relocated from Fort Lauderdale to Maine in 2019. Michele loves to garden, bake, travel, and enjoys all the terrific New England seasons and activities. Michele and Andy have two dogs, Harley and Caymus, as well as two cats, Frank and Scuba. 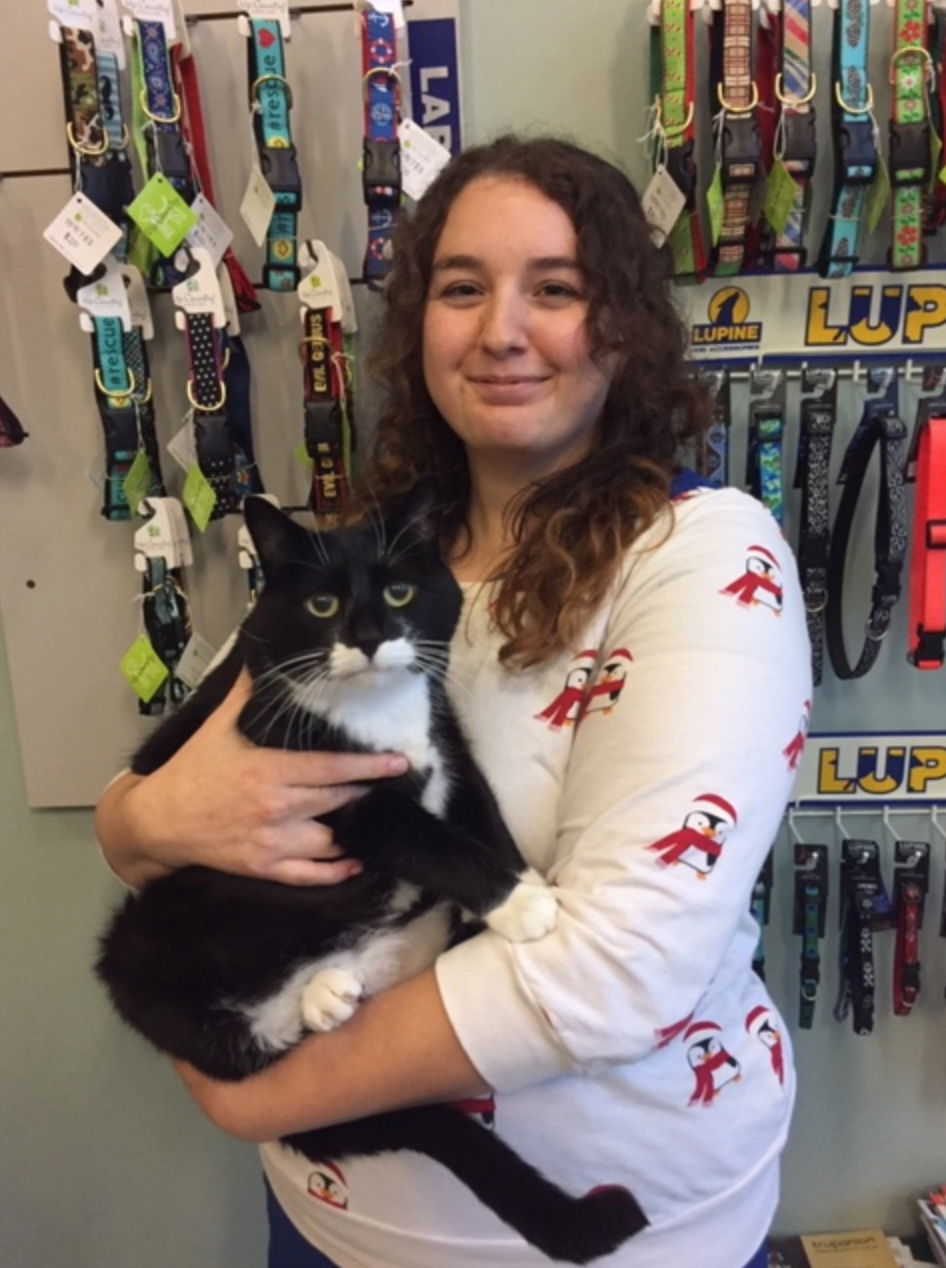 Nicole graduated from the Vet Tech program at Mount Ida College in 2012. She has two cats, Cilantro and Neptune, whom she spoils rotten. She also has a red eared slider named Fenris. In her spare time she volunteers at a horse rescue called Empowered Equines where she is learning positive reinforcement. 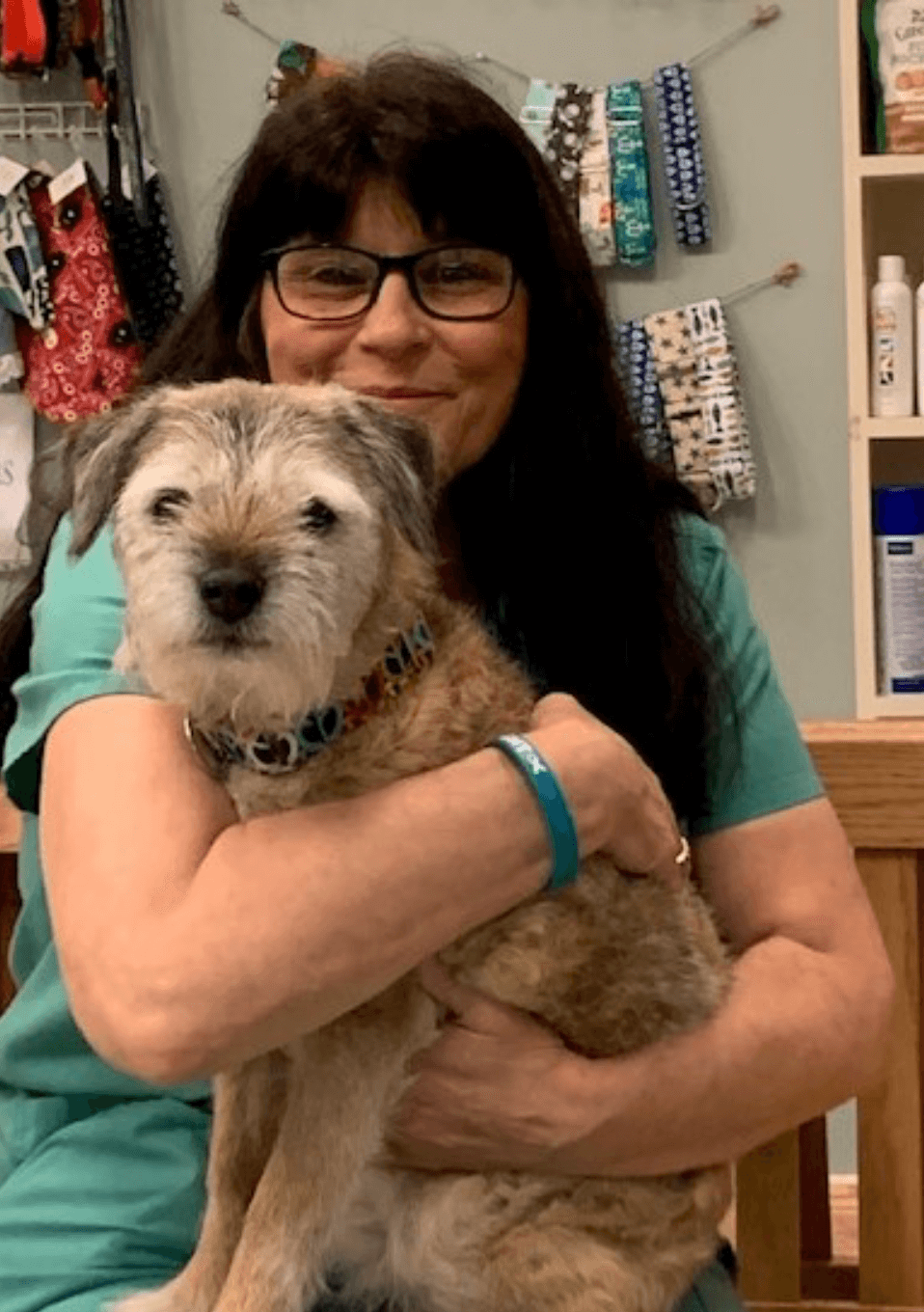 After raising her three children, Diane decided to follow her passion and help animals. She got certified as a veterinary assistant in 2011 from Animal Behavioral College. In 2018 Diane was certified Fear Free, successfully completing the 9 hour course. Diane has 3 grown children, Jessica, Rodney and Angela. She also has 6 grandchildren. She shares her home with her three dogs Rosco, Buddy and Ruby, as well as her two cats Peanut and Lily. In her free time Diane loves spending time with her family and pets, as well as watching movies and going out to eat. 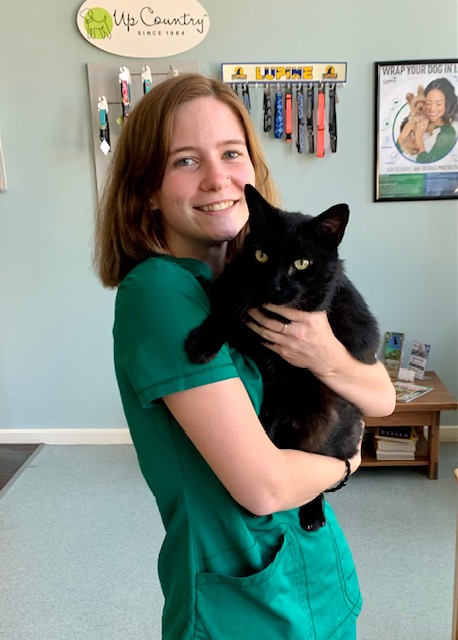 Yup, we have two Lavignes at Village Veterinary. Angela is Diane’s daughter. Angela has been with us since 2021 after she finished hiking half the Appalachian Trail. Her love of animals began early with their many family pets. In 2019 Angela received her BA in Art from Plymouth State University. During college she worked in a kennel caring for boarding and adoptable pets. This prompted her to pursue a career in a veterinary hospital. Angela spends her free time hanging out with her cat Bunny and her friends. Angela’s goal is to go back to school to become a licensed vet tech after learning from the best at Village Veterinary. 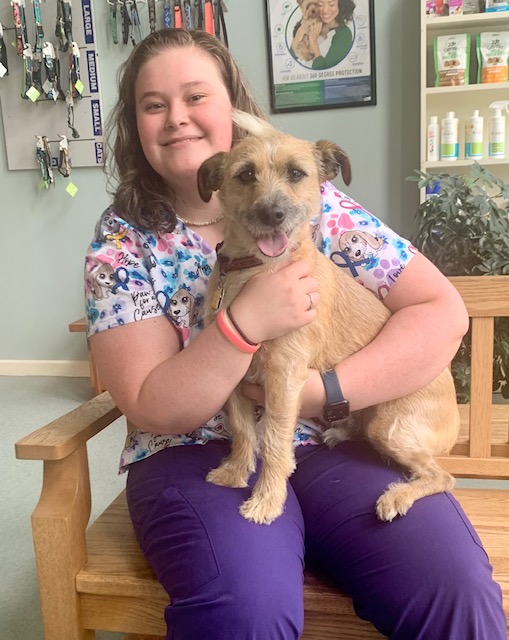 Morgan started her veterinary technician training at Medaille College in Buffalo, NY, then moved back home to NH, finishing her schooling at Great Bay Community College in May 2022. Summer camp at the NHSPCA as a child was instrumental in determining Morgan’s desire to become a veterinary technician as well as igniting her love of animals. Morgan worked as a kennel technician for 2 ½ years before joining the team at Village Veterinary as a veterinary technician. She is always looking for ways to make our animal patients feel better, as well as help their owners. Morgan has a Golden Retriever named Ginger as well as a wirehaired fox terrier mix named Jessie. She loves spending her free time reading books, hanging out with family and friends and camping in the white mountains of New Hampshire. 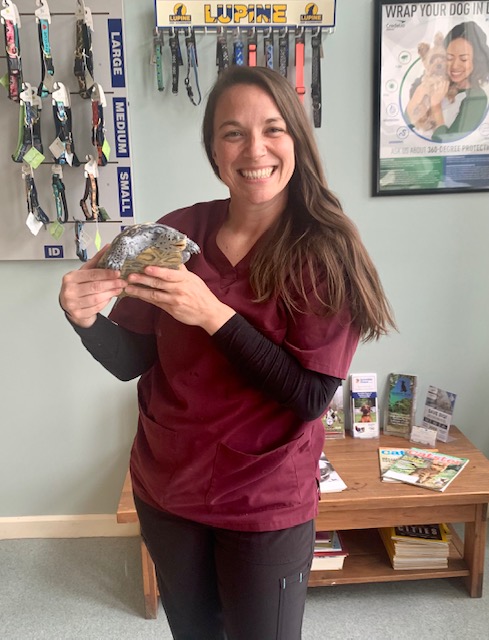 Jenny has been working with animals for over 13 years, and has been a veterinary technician for 5 years. She graduated from California’s Moorpark College with a degree in Exotic Animal Training and Management. Jenny’s career has taken her across the country and back again. She’s had the opportunity to work with a wide variety of animals – from fishers to foxes, snow leopards and sea lions to snakes, and all sizes in between. But her favorite animals are birds and cats. When not at the clinic, she is helping pet parents from Maine to Massachusetts train their dogs using positive reinforcement. Jenny and her husband are originally from New Jersey. They fell in love with Maine and, along with their 4 cats and chinchilla, are excited to call it home. Jenny loves learning new things, and is looking forward to gaining a better understanding of homeopathic and alternative medicine from Dr. Matthews and the team here at Village Veterinary! 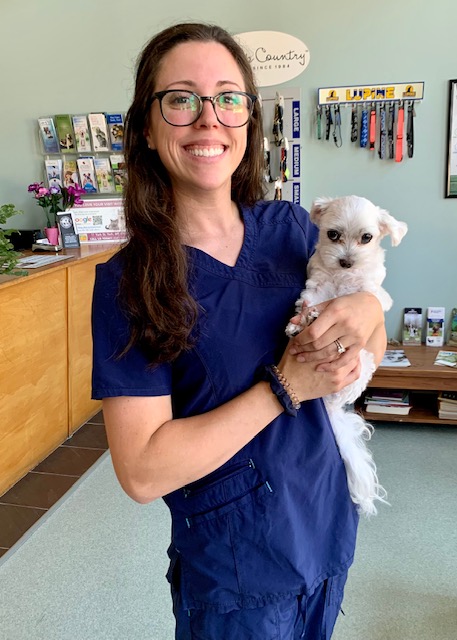 Lily Hayes is a Veterinary Technician that started with us in April of 2022. She graduated from the University of Maine and worked as a research technician in Boston and San Francisco before returning home to Maine! She enjoys travel and caring for her Maltese “Thumper” and her two cats’ “Nemo” and “Mr. Noodles.” 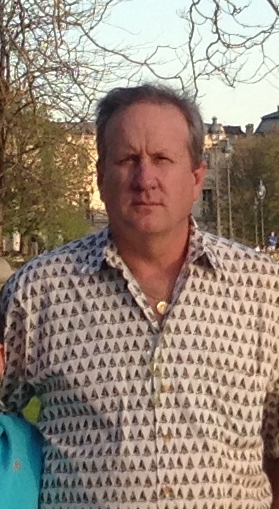 Neal frequently helps out in various capacities at Village Veterinary.  The husband of Dr. Matthews for the past 35 years, Neal is well versed in the workings of a veterinary hospital.  An engineer by trade with a BS in Agricultural Engineering from NCSU, Neal is self-employed, building golf courses and athletic fields.  During the winter months Neal may be found at Village Veterinary assisting clients, maintaining the physical facility, or simply giving a man’s point of view regarding the daily operations of the hospital. 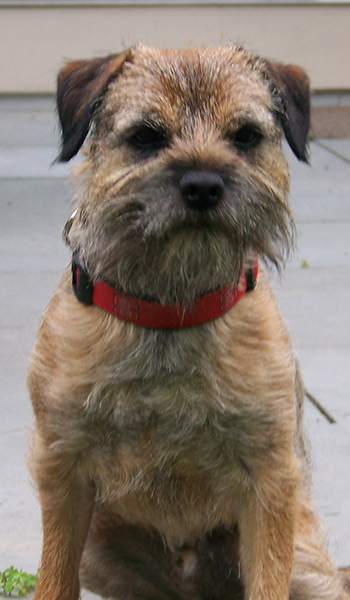 Willie is Dr. Matthew’s dog.  Willie goes everywhere Dr. M goes.  A Border Terrier, Willie was born March 7, 2007.  Willie greets everyone who enters the front door at Village Veterinary.  Willie is an empathetic dog, understanding when client’s are sad and need an extra head to pet or more hair on their clothing.  Willie is the star of the Village Veterinary series of TV commercials, of which there are currently four.  The most popular commercial, the Willie surfing episode, can be found on this website.

Get In Touch With Us Today